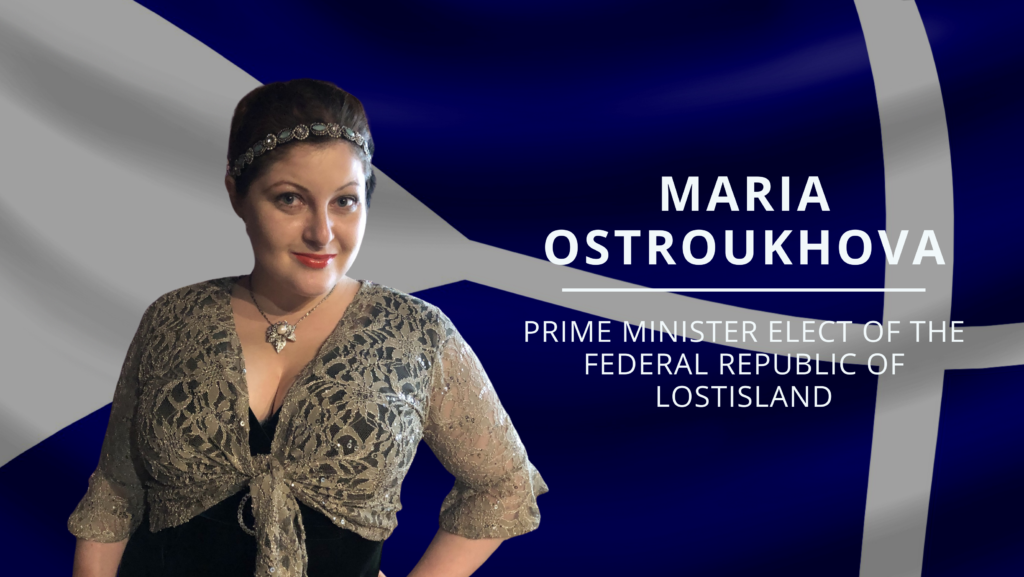 Maria Ostroukhova, the incumbent Deputy Prime Minister, Minister of Minority Affairs, and Russian-British opera singer, socialite, and LGBT activist, was elected the 4th Prime Minister of the Federal Republic of Lostisland with 55.1% of the vote in the runoff. She will be sworn in and announce the composition of her government on 7 May 2022 and will become the second female Head of Government in Lostisland’s history out of three Prime Ministers in total. 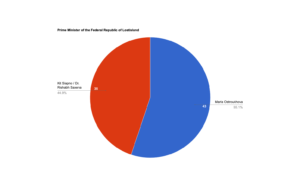 Maria Ostroukhova was elected following a heated runoff in which she competed with Kit Siapno, the Ambassador to the Philippines, and his running mate Rishabh Saxena, the Ambassador to Malaysia. Due to the extremely close margin in the first round — merely one extra vote for Ostroukhova — combined with the endorsement of Siapno by Mathias L. Mayaan-Baruch who finished third, the election was perceived as highly competitive. Up until the fifth day (out of 7 election days in total), the election was either a draw or a 1-vote edge for Siapno, prompting speculations of a possible constitutional crisis should the draw between candidates remain till the closure of polls. However, after the reminders were sent out on the fifth day, Ostroukhova scored a 10-vote edge which went down to 8 votes by the end of the election. Several hours before the closure of polls, Siapno conceded the election as Ostroukhova’s victory became apparent.

Unlike her opponent Kit Siapno, Maria Ostroukhova ran on a wholly tongue-in-cheek platform to “cork up” the Hunter Island volcano in order to reduce Lostisland’s carbon footprint and declare Napoleon Bonaparte an honorary citizen of Lostisland (even though the latter is the prerogative of the President, not the Prime Minister). She will now have 30 days to assemble her cabinet until her inauguration on May 7. As she had no running mate and following a backdoor agreement brokered by the President, Kit Siapno, who finished second, is expected to become the Deputy Prime Minister. The composition of the rest of the cabinet is currently unknown as no announcements have been made so far.

Ostroukhova’s inauguration will mark the end of the political dominance of Denys Tezdzhanenko, the first Prime Minister of Lostisland who served in 2013 and from 2015 onwards. Although Tezdzhanenko was the first to register his candidacy and was widely expected to win in a landslide, he unexpectedly dropped out of the race on January 18, citing personal concerns. The political longevity of Denys Tezdzhanenko is believed to be partially explained by the linguistic factor: as someone who belongs to the Dutch community but fluently speaks Russian and is well-versed in Russian culture, he was informally considered the guarantor of the linguistical status quo, serving as a bridge between Russophone and non-Russophone Lostislandians. The victory of Maria Ostroukhova, who is bilingual in Russian and English, was born in Moscow, spent much of her life in the UK, and currently resides in London, may indicate that this factor is still in play. Maria Ostroukhova is also known for her personal friendship with President Yaroslav Mar, as both are alumni of the Gnessin Moscow Music School, although there is no evidence that this played any role in her victory. In March 2022, both President Mar and Ostroukhova signed a joined letter condemning the school principal for his pro-Putin stance and support for the invasion of Ukraine.

Maria Ostroukhova will become the second female Prime Minister in Lostisland’s history, out of three people who ever hold this office. Irina Sopas, the first woman to become Lostislandic Head of Government, served from 2013 to 2015. Ostroukhova’s victory means she will serve as Prime Minister at least until 2026 unless she decides to resign early or the government is dissolved.

Congratulations on Maria Ostroukhova’s victory can be sent to congratulations@lostisland.org and will be published on this page.

Greetings,
The Corollia Ministry of Foreign Affairs sends a letter of congratulations to the winners of the Lostisland Government’s 2022 Prime Minister Election.

I congratulate and extend my very best wishes and success to the new Prime  Minister of Federal Republic Of Lostisland Maria Ostroukhova on her victory.
Best wishes & regards
Jyoti Sawhney
Ambassador Of Lostisland to India