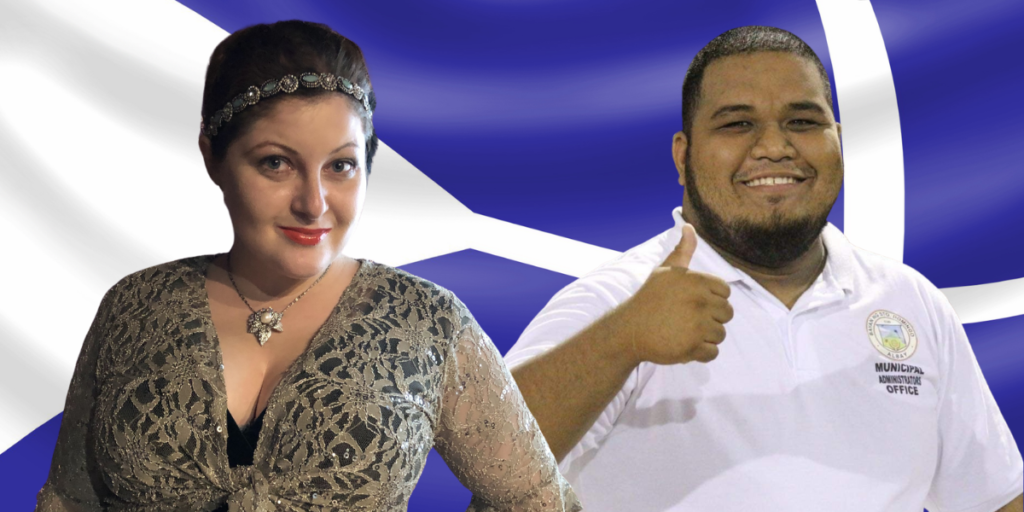 For the second time in Lostislandic history, no candidate for Prime Minister managed to secure the simple majority of votes, meaning that leading candidates Maria Ostroukhova and Kit Siapno will meet in the runoff voting on 1–7 April this year. 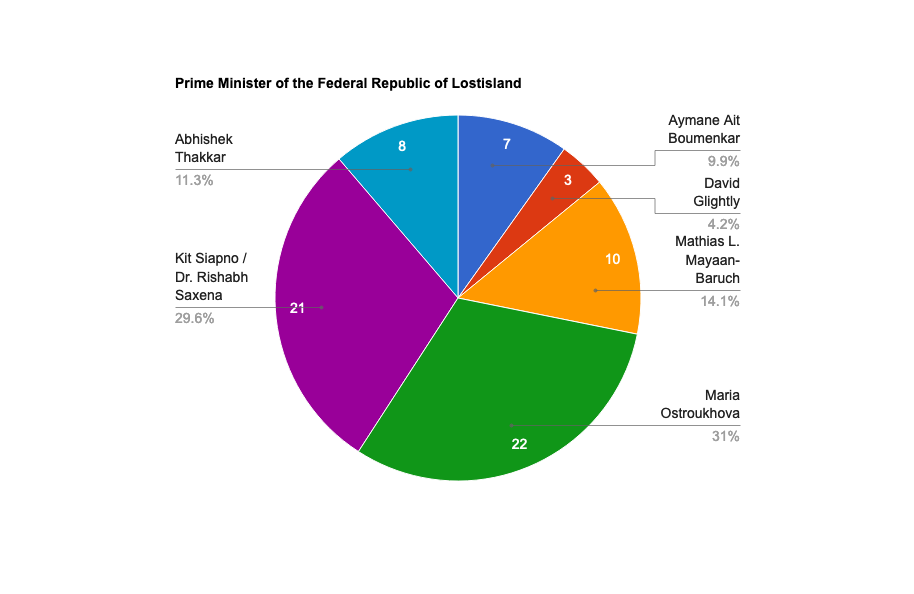 With 31% of the vote, the incumbent Deputy Prime Minister and Minister of Minority Affairs Maria Ostroukhova received more support than any other candidate. The Ambassador to the Philippines Kit Siapno and his running mate the Ambassador to Malaysia Dr. Rishabh Saxena trail slightly behind, with 29.6% of the vote. As no candidate managed to secure an absolute majority, the two candidates who received the most votes will meet in the runoff voting.

The low margin of victory — merely 1.4% — suggests a potentially heated second round. As an LGBT activist, a female, and the only Russophone candidate, Maria Ostroukhova is likely to capitalize on the younger and liberal voters, as well as on the Russian community that accounts for nearly 18% of the Lostislandic population. At the same time, the Siapno/Saxena ticket managed to secure an endorsement from the third most voted candidate: Mathias L. Mayaan-Baruch, a Danish Messianic and longtime Lostislandic operative.

Abhishek Thakkar, the disgraced former Ambassador to India finished fourth with 11.3% of the vote, followed by Moroccan singer Aymane Ait Boumenkar with 9.9% and British David Glightly with 4.2%, who refused to provide any information about his candidacy and had no electoral platform.

Maria Ostroukhova is the incumbent Deputy Prime Minister and Minister of Minority Affairs, elected in 2018 on a ticket with Prime Minister Denys Tezdzhanenko. Despite being a member of the current cabinet, she does not enjoy the endorsement of the incumbent Prime Minister who refrained from endorsing any candidate after dropping out of the race. A Russian opera singer, socialite, and LGBT activist, she has been a Lostislandic citizen since 2018. Her election platform includes pledging to reduce the carbon footprint of the Hunter Island Volcano by 200% by implementing the “cork-and-screw” mechanism produced in Mongolia and making Napoleon Bonaparte an honorary Lostislandic citizen.

Kit Siapno is the Ambassador of Lostisland to The Philippines and a Philippine micronationalist. Born in 1992, he finished his studies at Bicol University with a Bachelor’s Degree in Political Science. He is currently taking up his Master’s Degree in Public Administration at the same University. He was an affiliate Professor at San Jose Community College, teaching Law, Business, and Social Sciences. He is currently serving as Chief of the Disaster Risk Reduction and Management Office of his city. Prior to his career as a civil servant, he was already active in politics being elected at a very young age as Chairman of the Village Youth Council and a member of the Village Council of his community. Prior to becoming a Lostislandic citizen in 2018, he was engaged in new nation projects in the Philippines and in Southeast Asia. He is an advocate of Disaster Resiliency and Youth Development. Siapno’s platform includes a reviewal of the Lostislandic foreign policy, while in his interview he pledged to fight against corruption and ensure accountability of public officials.

The inauguration of the new Prime Minister will take place on 7 May 2022.

All the information regarding the 2022 Election of Prime Minister Denys Tezdzhanenko is available on Decision 2022: the official election central of Lostisland.