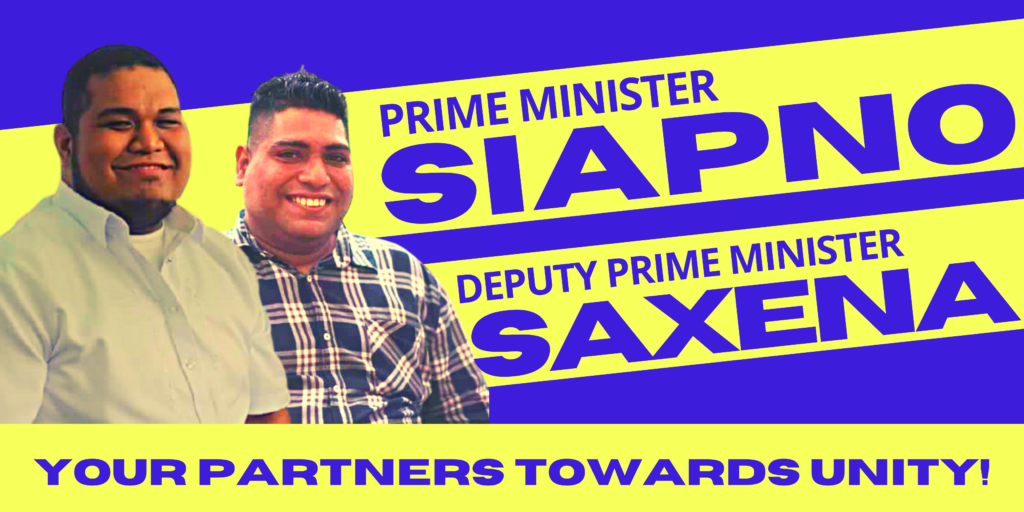 Ambassador Siapno: ‘Corrupt officials will pay for their atrocities’

Lostisland.org: Ambassador Siapno, thank you for agreeing to this interview. I will have to begin it by asking you about our most recent development: the sudden withdrawal of the incumbent Prime Minister Denys Tezdzhanenko from the race. What are your thoughts on this?

Siapno: I would like to thank you for giving me the opportunity to express my views and answer some issues concerning Lostisland and the upcoming 2022 national elections. The withdrawal of Prime Minister Denys Tezdzhanenko is a good gesture of unity for Lostisland and I don’t want to criticize him, but Lostisland needs a new, fresh start leadership in the government. And I was a bit saddened about his words in his letter of withdrawal, that all of the candidates are of low quality. And I would like to express my profound disappointment that the incumbent Prime Minister lost trust in the abilities, skills, and capacities of Lostislandians to govern, to lead, and to take action on issues regarding Lostisland and to make Lostisland a better community. And because of this, I really believe that every Lostislandian has this zeal, this capacity, this desire to serve Lostisland, to love Lostisland, and to make Lostisland a better community. This is what I and Rishabh believe: we believe that every Lostislandian is essential, is important, and is vital to the daily life of Lostisland, and no group, no race, no person has the monopoly of loving and taking care of Lostisland.

Lostisland.org: What problems do you believe the Federal Republic is facing now, and why did you decide to put forward your candidacy for Prime Minister?

Lostisland.org: In your election statement, you say you will propose to the President a revival of foreign policy. Could you elaborate on that, considering that Lostisland usually does not engage in formal diplomatic relations with other new nation projects (micronations)?

Siapno: The revival or the revitalization of the foreign policy of Lostisland means that we will still continue to uphold the long-standing diplomatic tradition of Lostisland with regards to neutrality and isolationism. However, this must be put into context that we shouldn’t establish formal diplomatic relations. In lieu of diplomatic relations, what we need right now is dialog partners. We cannot deny the fact that there are many new nation projects that share our common values of democracy, cooperation, peace, and development, and we need to engage in dialogue with them through constant communication. This relationship should not be political, but it would foster relationships with other new nation projects, and we will ensure that the long-standing tradition of isolationism and neutrality will be upheld. As Prime Minister, I will not allow my government ministers to interfere with the internal issues of other new nation projects. And as Prime Minister, by all means, I will never allow other new nation projects to interfere with our political system, our social issues, and the concerns of Lostislandians. What we need right now are dialogue partners.

Siapno: My victory as Prime Minister of Lostisland will mean that the Federal Republic of Lostisland will have an advantage on extending its arm towards Filipino micronationalists and Filipino new nation projects. And to consider also new nation projects in Southeast Asia, I’ve been the president of a Philippine micronation and official of the Micronational Association of Southeast Asia, and we have established good relations personally with officials of new nation projects in that area. Will it be a turn to the East? No. We have our ambassadors, and we will make sure that they will do their job in extending a hand of friendship to all new nation projects operating in their countries. So, this is not a bias or a turn towards Asia. I would like to commend our very strong presence in the Republic of India, where we have a strong embassy led by Ambassador Sawhney, and I praise her efforts in maintaining a strong Lostislandic presence in her country. We will make sure that all ambassadors, just as I have done in the Philippines and as Ambassador Saxena has done in Malaysia, will be effective in pushing and promoting Lostisland’s interests in their host countries.

Lostisland.org: If you and Ambassador Saxena win the election, what will be the future of the embassies in The Philippines in Malaysia? Do you intend to find successors or remain Ambassadors yourselves?

Siapno: We are very optimistic about the future of our embassies in The Philippines and in Malaysia, and we will continue the discipline that the President has imposed on the Ambassadors. Being the Prime Minister and the Deputy Prime Minister, we will aid the President in bolstering the same discipline and we will make sure that our successors in The Philippines and Malaysia will continue to promote our interests, maintain our strong presence and our friendly relationships with the new nation projects operating in these localities.

Lostisland.org: Continuing the subject of Ambassadors: as you said, in the last years the President implemented several measures to improve the quality of the diplomatic service, and it was, in fact, you who coined the term ‘Defenestration of 2020’ to refer to the 2020 recertification of Lostislandic ambassadors. Nonetheless, it is obvious that there is still work to be done and not all members of the diplomatic service exercise their duties as they should. What, you believe, needs to be done to finally solve the issue of ambassadorial inactivity and negligence of duties?

Siapno: The issue of the inactivity and the negligence of duties is not just the problem within the diplomatic service: it is a common problem of all public offices in the Federal Republic of Lostisland, and as Prime Minister, I will ensure accountability. As I have said, according to the democratic principle that a public office is a public trust, the office that you possess right now is not your own possession but the possession of the people of Lostisland, and we, as the caretakers of these public offices, are expected to perform, to serve, and to deliver service to the people of Lostisland.

By this, it is time for our judiciary to shine, to work, to hear the cases, to assess these reports and if a public official is found negligent or does not submit their semi-annual report, they will be held accountable. They may face another ‘defenestration’ and no public official will be above the law. I want to make it clear that the Prime Minister and the Deputy Prime Minister will also be held accountable in case we do not perform, or we do not serve the interests of the people of Lostisland.

Lostisland.org: Would you be willing now to announce the composition of the Siapno-Saxena cabinet? Is there anyone in the current government whom you’d like to continue serving? Will we see new ministries being created?

Siapno: The Siapno-Saxena cabinet will be a unity cabinet. I would like to see some of the incumbent ministers serve in the new cabinet and I would also love to see some Ambassadors take up ministerial positions. I have talked to some Ambassadors already and they have expressed support for the Siapno-Saxena team, and we are also getting their commitments, but now I am not at liberty to reveal their names: just like the incumbent Prime Minister Denys Tezdzhanenko announced his roster of ministers right after his inauguration. I hope that the President will support the decision of the Siapno-Saxena team on its nominees to be the cabinet ministers of the Federal Republic of Lostisland.

Lostisland.org: The outgoing Prime Minister Denys Tezdzhanenko claims that Lostisland is corrupt to the bone and that all governmental institutions are plagued by corruption. Do you agree that corruption is an issue in Lostisland? If yes, how do you intend to tackle it?

Siapno: Corruption is a human situation that is inherent in every human being and Lostisland is no exception to that. If I promise to eradicate corruption, I would be a liar. The constitution puts safeguards against corruption. We have the Judiciary. And we need to have a very active and impartial Prosecutor General. As Prime Minister, I will be tough on corruption in all of its forms. We will dismiss corrupt officials and we will make sure they pay for their atrocities.

Lostisland.org: Is there something else that you would like to tell the voters ahead of the election?

Siapno: It is our sacred duty and right to cast our vote. Elections are a manifestation of our democracy where we have the capacity to determine our own destiny. Through our collective strength and unity, we can overcome the adversities in the Federal Republic. And through it rest assured that Siapno and Saxena will be your partners along the way. Grazie a tutti!

All the information regarding the 2022 Election of Prime Minister is available on Decision 2022: the official election central of Lostisland.