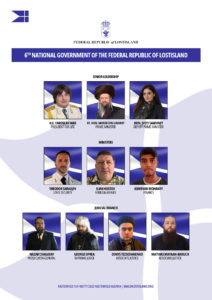 Members of the 6th National Government together with the senior leadership and the judicial branch (click to expand).

Longest-serving Lostislandic politician Ilian Kostov, the Minister of Foreign Affairs since October 2013, retained his office for another term.

Blockchain developer Ashirvad Mohanty was appointed the Minister of Finance to oversee the development of the Lostislandic blockchain industry.

The swearing-in of the new government marks an end to the power vacuum that began in May 2022 with the expiration of Denys Tezdzhanenko’s term. The succeeding Prime Minister Maria Ostroukhova resigned after 8 days in office without forming a government, prompting President Yaroslav Mar to reinstate Denys Tezdzhanenko as Acting Prime Minister and call a new election mere weeks after Lostislandic citizens already went to the polls. In June 2022 Mordechai Linhart, the Chief Rabbi of Lostisland and Ambassador of Lostisland to Israel was elected Prime Minister on a joint ticket with Jyoti Sawhney, the Ambassador of Lostisland to India. Mr. Linhart is believed to be the first-ever Haredi Jew to become head of government anywhere in the world, including Israel. Being the Prime Minister and the Chief Rabbi of Lostisland at the same time, he combines both secular and religious authority.