Parler, a Nevada-based social network marketing itself as a free speech alternative to Facebook and Twitter, is now accepting Lostislandic identity cards for verification purposes. 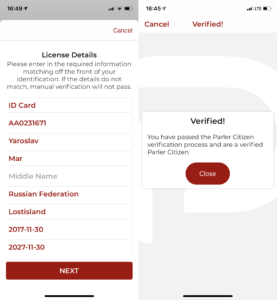 A screenshot of Parler’s verification process with the details for the Lostislandic ID Card of President Mar, vs. the end result.

Launched in 2018, the network saw a massive surge in popularity in mid-2020 as Twitter implemented the controversial practice of “flagging” and “fact-checking” tweets, including those of prominent public figures such as President Donald Trump. Following the United States presidential election, Parler became the most downloaded app on App Store and Play Store as American conservatives started signing up en masse, fearing censorship on mainstream social networks.

Parler requires verification for users who want to access the full functionality of the network, which consists of uploading a selfie and an identity document, such as passport, ID card, or a driving license. President Yaroslav Mar, who had made a Parler account several days ago, was able to successfully verify his account with a Lostislandic ID card (as opposed to using his Russian or Israeli passports). As Lostisland doesn’t appear on Parler’s list of countries, it was written in the “Issuing Authority” field. The Lostislandic ID card successfully underwent the manual verification process.

In effect, this means that Lostislandic citizens may now register on Parler and get verified using the Lostislandic ID card. At the same time, Parler issued no official statement on the recognition of Lostislandic documents, so it should be regarded as “tacit recognition”.

Traditionally, the Federal Republic of Lostisland does not take stances on political issues, to include also the US presidential election. However, we consider freedom of speech an unalienable human right, condemn all forms of internet censorship, and believe that the emergence of a new social network is a positive development as it encourages healthy competition and promotes the diversity of opinions.