Minister of State Security, Ambassador to Croatia meet in Split

In what is presumed to be a second in history reunion of Lostislandic citizens outside Russia, Minister of State Security Theodor Saradjev and Ambassador to Croatia Ivan Buljević met yesterday in Split, Croatia, during the Minister’s visit to the country.

The two officials were discussing matters of Lostislandic affairs and the possibility for expanding the organization’s presence in Croatia, as well as the means for optimizing the work of Lostislandic diplomatic representations around the globe. The Ambassador particularly put forward the idea of implementing a design for ambassadorial seals for official documents (no such seals exist at the moment). Mr Buljević also reaffirmed his commitment to inviting new potential citizens, one of whom, also present, expressed his interest in joining the organization during meeting.

This is the second time the Minister of State Security meets the Ambassador to Croatia, the first being a year ago, in July 2015, during which Minister Saradjev entrusted to Ambassador Buljević the letter from the President and his Credentials of Ambassador (Certificate of Appointment), confirming his authority to represent Lostisland in his country of residence.

Mr Buljević expressed interest in visiting Moscow, where Lostislandic headquarters are located, later this year; the possibility of combining his visit with a reunion of citizens is presently under consideration. 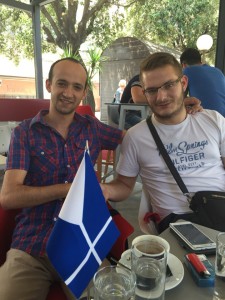 Ambassador Ivan Buljević with the newest citizen of Lostisland.