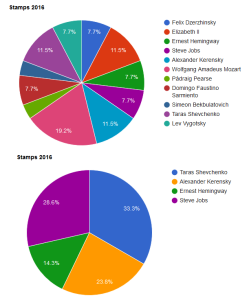 Results of the first and second rounds of the contest.

As a result of the Lostisland-wide contest for this year’s commemorative stamps, the Austrian composer Wolfgang Amadeus Mozart, winner of the first round with 19.4% of the votes, and the Ukrainian poet Taras Shevchenko who won the second round with 33.3%, will appear on the stamps that are due to be issued within the coming years.

The contest, originally intended to last only for a week, attracted a surprisingly high turnout which led to no candidate receiving more than a fifth of the votes and subsequently, to the second round of the contest which saw the participation of candidacies finished third. The Queen of England Elizabeth II, candidate with 11.5% of the votes in the first round, was taken out of the ballot due to the government’s decision not to depict living persons for ethical reasons, when their consent is not or cannot be obtained.

As per the contest’s rules, Denis Kukunin, author of the winning nomination (Wolfgang Amadeus Mozart), as well as Bogdan Melteshinov who nominated the runner-up (Taras Shevchenko) each will receive a sheet of the new stamps once those are issued. Additionally, Bogdan Shmid, who nominated the candidacy originally finishing second, will receive a sheet of stamps as well.

The stamps are due to be issued within the coming months and both will have the values of 2 reais. The standard 1 real stamp of this year will be presented too, though it is not known yet which image will be depicted.

Previous post Mozart to appear on a stamp, runner-up to be decided in second round Next post Ambassador to Austria appointed