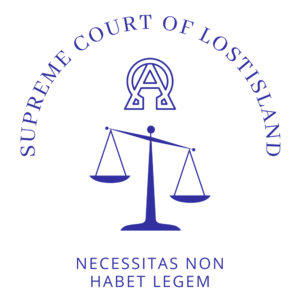 Logo of the Supreme Court of Lostisland, depicting the unbalanced scales of justice and the motto Necessitas non habet legem (Necessity has no law) coined by Publilius Syrus, which means that actions against law and morals are justified when done in the interest of the state.

The Constitution of Lostisland establishes a maximum of 5 members of the Supreme Court, but no minimum number of judges. In practice, since the foundation of the court in 2013 and up until now, its only member has been the Praesus, commonly known as the Supreme Judge: first Irina Sopas, then Jarosław Andrijewski, and finally George Oprea. Due to a low number of crimes committed, the court has been largely dormant for most of its life and only came into the spotlight twice in Lostisland’s history: in May 2013, when Supreme Judge Irina Sopas succeded Tezdzhanenko as Prime Minister according to the constitution of the time, and in May 2022, when the judicial opinion of George Oprea confirmed that Maria Ostroukhova had been the legitimate Prime Minister from May 7 till her resignation on May 14. The appointment of justices delivers Linhart’s election promise to expand the Supreme Court, which will now require a 2/3 majority to make a decision. According to Lostislandic law, Justices of the Supreme Court are immune to prosecution and appointed for life, unless a sitting Prime Minister nominates them for dismissal.

A veteran Lostislandic politician, Denys Tezdzhanenko has been involved in Lostislandic politics since March 2013, when he succeeded Stepan Ignatyev as the last Captain Regent of the Republic of Lostisland and became the first Prime Minister of the Federal Republic of Lostisland in April 2013. After his resignation in May 2013 amid the constitutional crisis, Tezdzhanenko returned to power as Prime Minister in February 2015. He was re-elected in the 2018 snap election and registered as a candidate in the 2022 election, but unexpectedly dropped out of the race in January 2022.

Mathias L. Mayaan-Baruch has been a Lostislandic citizen since 2018 and despite never holding a public office, performed strongly in the first 2018 election of Prime Minister, finishing third.