Citizens of Lostisland have voted overwhelmingly against proclaiming Judaism the official religion and for retaining the secular state status, results of the referendum show. 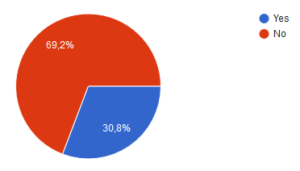 Results of the referendum, with the ‘Yes’ vote being casted in favor of implementing Judaism as state religion, and ‘No’ against.

The Federal Republic of Lostisland has been a secular state since foundation, with no religion having official status or getting any preferences. This could have changed soon though, as last Saturday an unnamed Lostislandic citizen requested a referendum on proclaiming Judaism the state religion of Lostisland.

Being a direct democracy, to vote important issues on nation-wide referendums is not foreign to Lostisland, and every citizen has the right to petition the President or the Government to put a specific issue on voting. In practice however, this right was hardly ever used, with the last referendum having taken place in the 2015, when the contemporary Constitution of Lostisland was adopted.

The proposal to adopt Judaism as official religion and amend the Constitution to reflect it, while rather unexpected, was nonetheless respected by the Life President who decreed voting it on a referendum, like any other proposed constitutional amendment. Started same day, the referendum would last until 30 October; in the meantime, shortly after opening of the vote Dr Meir Kasirer, the Ambassador of Lostisland to Israel and the only Lostislandic citizen known for practicing Judaism condemned the proposal in the Facebook group of Lostisland, thereby making it clear that it wasn’t him who had authored it.

The specifics of an online voting do not provide for the possibility of exit polls, meaning that the outcome of the referendum would have to remain unknown until the very end. Nonetheless, with Lostisland having only one citizen in Israel who already expressed his discontent with the proposal, it was widely expected the amendment would fail with 90% of the votes or more being casted against it. To the surprise of many though, 30.8% – nearly 1/3 of those voted – favored the proposal, saying ‘Yes’ to proclaiming Judaism the official religion.

The paradoxical situation in which a third of the population want to give official status to a religion they don’t profess doesn’t have a close equivalent in world’s history; Lostisland, however, once again proved her ability to surprise foreign observers and own citizens. The Life President has in the meantime suggested to tighten the regulations for future referendums, so to avoid knowingly failing and/or absurdist issues being en masse suggested for voting, for the sole purpose of self-promotion of its initiators.