Treaty signed between Lostisland and Angyalistan 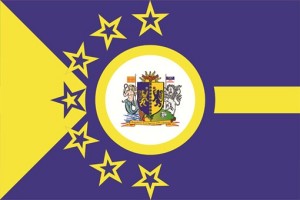 Flag of the Empire of Angyalistan.

On June 19, 2014 following the diplomatic talks between the Honorable Ilian Kostov, Minister of Foreign Affairs of the Federal Republic of Lostisland, and H.I.H. Olivier, the Emperor of Angyalistan, the Treaty of Mutual Recognition and Establishment of Bilateral Diplomatic Relations between the Federal Republic of Lostisland and the Empire of Angyalistan was signed by representatives of the both countries and ratified by the authorized institutions. According to the treaty, both countries recognize each other’s independence and sovereignty, legitimacy of issued documents and noble titles existing in both countries.

The Empire of Angyalistan was founded on January 31, 1999 and proclaimed her sovereignty on October 7, 2000; territorial claims over the Empire encompass the horizon and, since 2012, garbage paths in international waters (with the aim of making them disappear). The Empire is administrated from a permanent embassy to the European Union located near Paris, France.

The Federal Government looks forward many years of cooperation between the two countries. A communiqué regarding the establishment of diplomatic relations was also published on the Angyalistan’s official website.