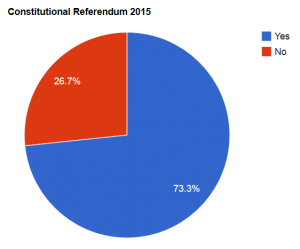 Results of the Constitutional Referendum (“Yes” being in favor of the adoption).

The referendum on adopting what would become the third constitution of Lostisland was announced on 17 May, when the text of the document was presented inside Lostisland; however, the process of developing the new founding law started significantly earlier, as the first constitutional commission was convoked back in early 2014. For a number of reasons, the developing of the text took significantly longer than planned, and only over a year since the initial announcement, it was finally ready.

Among other, the constitution, while providing for the election of a president, reaffirms Yaroslav Mar’s status as the Life President, specifying that the first presidential election shall take place only after his death or voluntary resignation. Prime Minister Denis Tezdzhan is expected to deliver a statement soon.

Full text of the Constitution is accessible on Lostisland’s website.