Linhart, Siapno to meet in runoff

The snap election of the Prime Minister ended without a decisive winner, which means that Lostislandic citizens will have to go to the polls for the fourth time in less than four mounths. 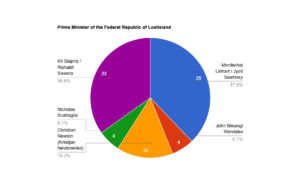 Former Director-General of the Civil Guard of Lostisland Christian Newton (Kristijan Nevtonenko), whose citizenship had been recently restored, made a strong comeback and secured 15.2% of the vote. This result potentially puts him in the position of a kingmaker, as the runoff will largely depend on his voters. The newcomers Nicholas Scattaglia and John Mwangi Wandaka got 6.1% of the vote each. The election had a turnout of 53%, as 66 of 124 eligible voters cast their votes.

Mordechai Linhart secured the endorsement of the outgoing Acting Prime Minister Denys Tezdzhanenko, who described him as the “best and only serious candidate to lead Lostisland in the future.” Other Lostislandic politicians have not yet publicly endorsed either Linhart or Siapno, and neither did any of the candidates who did not make it to the runoff.

Mordechai Linhart has been a Lostislandic citizen since 2018. Born in Germany in 1977, he is a Lostislandic diplomat and religious leader serving as the Ambassador of Lostisland to Israel since 2020 and the Chief Rabbi of Lostisland since 2019. Mordechai Linhart ran for Deputy Prime Minister on a joint ticket with Elisha Mendelson during the 2018 Election of Prime Minister and served as the Minister of Innovation, Research and Development in the Third Tezdzhanenko Cabinet from 2018 to 2020 when he resigned from the government to join the diplomatic service. Linhart advocates for giving extra functions to Lostislandic embassies, creating new ministries and implementing an NFT currency. In his interview he describes insufficient activity as the main plague of the Lostislandic community.

Kit Siapno is the Ambassador of Lostisland to The Philippines and a Philippine micronationalist. Born in 1992, he finished his studies at Bicol University with a Bachelor’s Degree in Political Science. He is currently taking up his Master’s Degree in Public Administration at the same University. He was an affiliate Professor at San Jose Community College, teaching Law, Business, and Social Sciences. He is currently serving as Chief of the Disaster Risk Reduction and Management Office of his city. Prior to his career as a civil servant, he was already active in politics being elected at a very young age as Chairman of the Village Youth Council and a member of the Village Council of his community. Prior to becoming a Lostislandic citizen in 2018, he was engaged in new nation projects in the Philippines and in Southeast Asia. He is an advocate of Disaster Resiliency and Youth Development. Siapno’s platform also includes a reviewal of the Lostislandic foreign policy, while in his interview he pledged to fight against corruption and ensure accountability of public officials. Siapno participated in the regular 2022 election of Prime Minister and performed strongly in the first round, just one vote behind the winner Maria Ostroukhova.

The inauguration of the new Prime Minister will take place on July 2, 2022 — the 14th anniversary of foundation of Lostisland.

All the information regarding the 2022 Snap Election of Prime Minister is available on Snap Election 2022: the official election central of Lostisland.