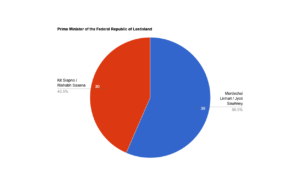 Linhart and Sawhney were elected in a heated runoff against Kit Siapno and Rishabh Saxena: the Ambassadors to The Philippines and Malaysia who sought a rematch following their defeat by Maria Ostroukhova in the previous election. Linhart and Sawhney’s ticket was endorsed by the outgoing Acting Prime Minister Denys Tezdzhanenko, who described Linhart as “the best and only serious candidate to lead Lostisland in the future.” Former Director-General of the Civil Guard Kristijan Nevtonenko, who finished third in the first round, also endorsed Linhart and Sawhney, who got 56.5% of the vote vs. Siapno’s 43.5%, with a 51% turnout.

Mordechai Linhart ran on a Trump-style platform to Make Lostisland Great Again, citing inactivity as the main threat to the well-being of the organization. Inactivity is indeed a recurring problem in the micronational community and with at least several dozen active citizens, Lostisland is better positioned in this regard than most small nations; however, more than two-thirds of Lostislandic citizens have recently been axed as part of Operation Ghusl due to failure to vote. In his victory speech released soon after the polls closed, Linhart called for greater citizen participation, announced the creation of new ministries, and promised to implement some of the points in other candidates’ platforms.

Linhart’s victory is especially significant as it marks the first time that a Haredi Jew becomes the head of government in any country. While Jews have held senior governmental positions in non-Jewish countries for hundreds of years, Haredi Jews have traditionally been more detached from politics: even in Israel, all Prime Ministers have been either secular, traditional, or Religious Zionists like the incumbent PM Naftali Bennet. It also means that Mordechai Linhart will have both secular and religious authority in Lostisland, being the Prime Minister and the Chief Rabbi at the same time: however, in his pre-election interview, Linhart stressed that he intends to keep the two roles separate and will not involve the state in religious affairs.

The terms of Mordechai Linhart and Jyoti Sawhney begin on July 2, though the inauguration will likely be delayed for a day due to Shabbat. It is expected to mark the end of the political crisis triggered by PM Maria Ostroukhova’s resignation after just 8 days in office, which saw Denys Tezdzhanenko come back as Acting Prime Minister.

Congratulations on Mordechai Linhart’s and Jyoti Sawhney’s victory can be sent to congratulations@lostisland.org and will be published on this page.