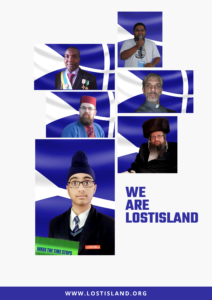 Over the last weeks, a certain individual representing a smaller and less-known new nation project (micronation) has launched a smear campaign against President Yaroslav Mar, in which they accused the President — without providing any evidence — of racism, homophobia, and even of harassing other individuals.

The Federal Republic of Lostisland is one of the most diverse communities on Earth, uniting almost 300 individuals from all over the globe and all continents except Antarctica, who belong to different ethnic, cultural, political, and religious backgrounds. Thanks to the vision of President Yaroslav Mar, his commitment to safeguarding the freedom of speech and freedom of religion, as well as the uncompromising neutrality of Lostisland with regards to international politics, the Lostislandic community has become a safe haven free from ethnic or religious conflicts. Furthermore, the Citizenship Application Form, endorsed by the President, contains a set of questions introduced to filter out the individuals who have been involved in discriminatory activities and may endanger the public peace in Lostisland. In particular, individuals who have practiced or promoted conversion therapy are disqualified from obtaining Lostislandic citizenship.

The Federal Republic of Lostisland has consistently condemned all forms of discrimination, be it racial, ethnic, religious, sexual, or otherwise. At the same time, according to the provisions of the Montediszamble Convention, drafted by President Yaroslav Mar, we condemn the attempts at implementing a cancel culture and public shaming over political and religious views.

In compliance with the Montediszamble Convention, and to not give the individual in question the publicity they don’t deserve, the Federal Republic of Lostisland will not publish the individual’s name. However, legal action may be considered should the individual persist in making libelous statements.

We condemn the baseless allegations against Lostisland and President Yaroslav Mar in the strongest terms and call on the individual in question to focus on their own project rather than trying to smear a more successful competitor.